The Fire Service received a call for a report of smoke issuing from the roof of a property on Grace Road Central, Exeter at 12:30am this morning (Sunday 2nd May) 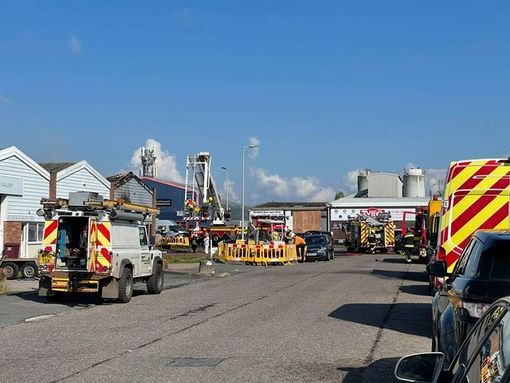 The Fire Service received a call for a report of smoke issuing from the roof of a property on Grace Road Central, Exeter at 12:30am this morning (Sunday 2nd May)

Initially two fire engines and an aerial ladder platform from Danes Castle, a fire engine from Middlemoor and a supporting officer were mobilised to this incident.

On arrival a further two fire engines were requested which proceeded again from Middlemoor and another from Topsham along with an incident command unit from Honiton and two more specialised officers.

At 01:21am a further fire engine was requested for personnel which was mobilised from Crediton and at 01:56am another two fire engines were required which proceeded from Ottery St Mary and Exmouth and specialist appliances were also mobilised on the request of the fire ground.

A single storey building measuring 15m x 30m used as a joinery workshop has been 90% damaged by fire and an adjacent property 10% damaged by smoke and also water damage.

Propane cylinders that were involved in the incident were removed and vented off, low hazard asbestos was also involved and crews have been decontaminated.  Electric and gas utilities isolated to the building.  Equipment used .. 1 x 105 ladder, 3 x main jets, 2 x hose reel jets, 1 x safety jet, thermal imaging cameras and small tools, 2 x aerial ladder platforms and 6 breathing apparatus.  The cause of the fire is yet to be confirmed when fire investigation is carried out.