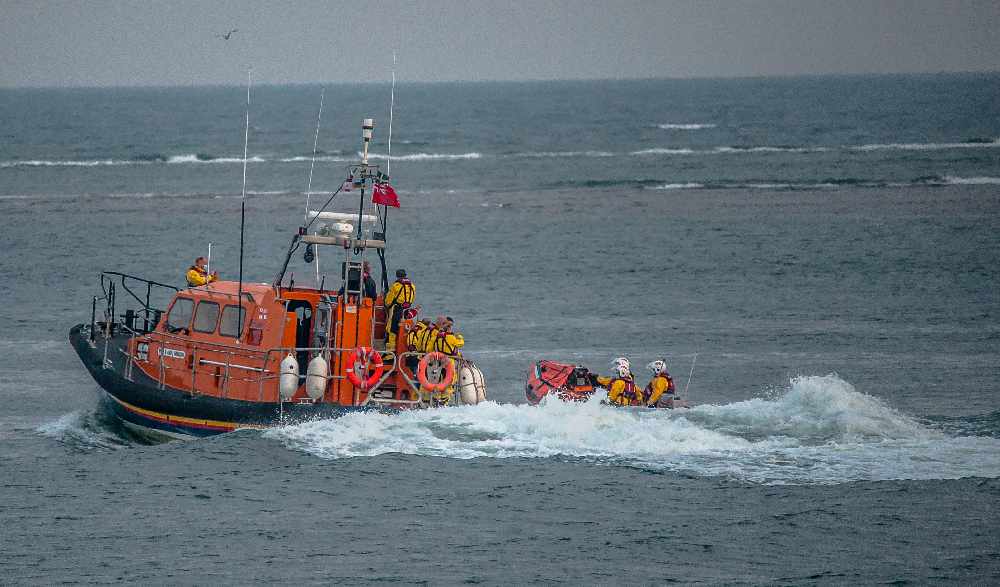 Photo: On Your Mark Photography

Exmouth RNLI crew members launched their all weather lifeboat 26 times and inshore lifeboat on 53 occasions, aiding 51 individuals and saving 3 lives, whilst spending a total of 491 hours in their quest to save lives at sea.

The RNLI in the South West has today released its annual rescue figures which show that despite much of the year spent under lockdown restrictions, the regions volunteer lifeboat crews were as busy as ever and launched on average four times a day.

The latest annual statistics for 2020 show the RNLI’s volunteer crews at the 33 lifeboat stations in the South West* launched 1,291 times, aided 1,225 people and saved 30 lives, up on the 29 lives saved in 2019. During the summer, RNLI lifeguards on beaches across the region attended 6,287 incidents and aided 9,179 people and saved 56 lives.

Exmouth RNLI crew members launched their all weather lifeboat 26 times and inshore lifeboat on 53 occasions, aiding 51 individuals and saving 3 lives, whilst spending a total of 491 hours in their quest to save lives at sea.

This year with more people expected be holidaying close to home, the RNLI predicts another busy summer. The lifesaving charity is calling for people to support its Mayday campaign to raise funds to ensure volunteer crews can continue to save lives at sea.

The RNLI’s Mayday campaign launches on Saturday 1 May and runs throughout the month. Lifesavers in the south west are calling on supporters to join the Mayday Mile and cover at least one mile in any way they chose and raise vital funds to keep people safe on our coastline.

People have already been signing up to support the challenge, such as AJ Roberts from Tiverton who has recently recovered from a kidney transplant and will be covering her Mayday Mile backwards. Teresa Drage who heads up the fundraising team in Weymouth, has challenged herself to do a mile day throughout May, Teresa uses a walker to get around and will be carrying a yellow welly to raise awareness. While at Five Islands Academy on St Mary’s in the Isle of Scilly all pupils will be covering a mile to raise funds for the RNLI.

In Exmouth, crew members Geoff and Dougie have nearly reached their £2k target to complete a relay of no less than 72 kilometres, representing one kilometre for every lifesaving emergency Exmouth RNLI were tasked to attend in 2020. Find out more here : https://www.justgiving.com/crowdfunding/72for72

Figures also show that the number of incidents involving people kayaking and canoeing was 33% above the national average in the south west, and incidents involving paddle boarding were 25% above. 74 lifeboat calls out were to people finding themselves in trouble on these craft in 2020.

Nationally the summer of 2020 saw a big increase in the call outs to swimmers in trouble, with 152 service calls for volunteer crews.

‘We all saw the images of packed beaches around the coast as restrictions lifted last summer, which meant a hugely busy season for the RNLI in South West as a whole. As another summer approaches, we know that our lifesavers face more huge challenges in keeping everyone safe, which is why we’re now the ones sending out our own Mayday call and asking for help. Our annual Mayday fundraising campaign is our call for your support to help keep you and your family safe at the coast this summer.’

Tom added: ‘Our lifesavers drop everything to run to the lifeboat station when the call comes, so we’re asking our supporters to put themselves in the crew’s boots and join the Mayday Mile. Every penny raised during Mayday will go towards ensuring we are ready to save even more lives this year.’

Mayday Milers can sign up to join the South West team and either create their own Mayday Challenges or contribute to the collective effort to walk the 630 mile south west coastal path at https://themaydaymile.rnli.org/teams/south-west-regional-team

Or to find out more or make a donation in support of the RNLI’s lifesavers, visit RNLI.org/supportMayday