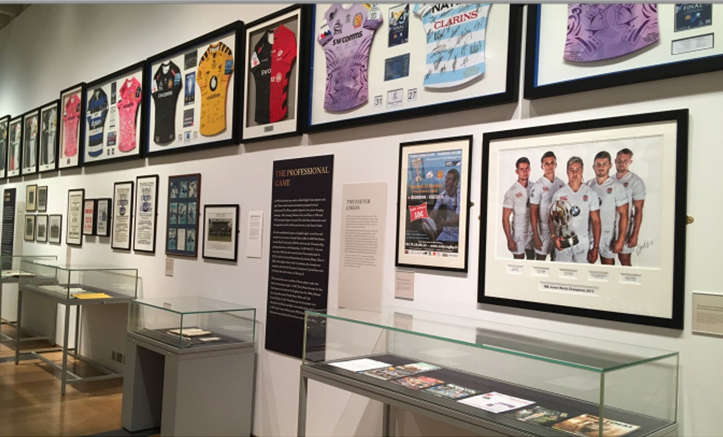 Supporters of Exeter Rugby Club will be able to go back in time this month with the opening of a new exhibition all about the club at the Royal Albert Memorial Museum in the heart of the city.

As the club continue their 150th Anniversary celebrations, the month-long showcase entitled 'From Local Heroes to European Champions' will feature an array of memorabilia and artefacts from the creation of the club through to modern day, taking visitors on a journey through our recent successes at the top of European rugby, back to the early days of rugby within the region.

Detailing the rise and rise of the Rugby Club throughout the years, the exhibition includes memorabilia that has been collected by not just by the club, but players and supporters alike.

On show at the RAMM Museum are items such as the Heineken Champions Cup, Premiership Rugby trophies, Anglo-Welsh Cup, as well as the Women's team's first trophy, the Allianz Cup.

Other objects on show include team shirts, a rugby ball signed by the All Blacks in 1963, and historic programmes and scrapbooks.

Exeter Rugby Club Chief Executive and Chairman, Tony Rowe OBE, said: "A huge amount of work has gone into creating what we believe is a fantastic, historical journey through the years of our great club. Some of the artefacts that have been unearthed are extraordinary, yet detail how the club was formed and how it has developed over the many years.

"For supporters of our club, this really is a rare chance to unearth more about the history of Exeter Rugby Club and we hope as many of you as possible take the opportunity to visit the exhibition."

Deputy Leader of Exeter City Council, Councillor Laura Wright, added: "Exeter Chiefs are an integral part of the city's identity, and being able to find out so much about their history through this exhibition at RAMM will be a fascinating experience for everyone. It’s great to see two of our oldest institutions – the Chiefs and the RAMM – working together."

Younger visitors can enjoy the museum's craft activity ‘Between the Posts’ on August 12 & 16 August, or put their rugby skills to the test in the garden at RAMM on our ‘Av a Go’ days on August 12 & 26.

On Wednesday evening, the Lord Mayor of Exeter, Councillor Yolonda Henson, was joined by other leading dignitaries for a special preview of the exhibition.