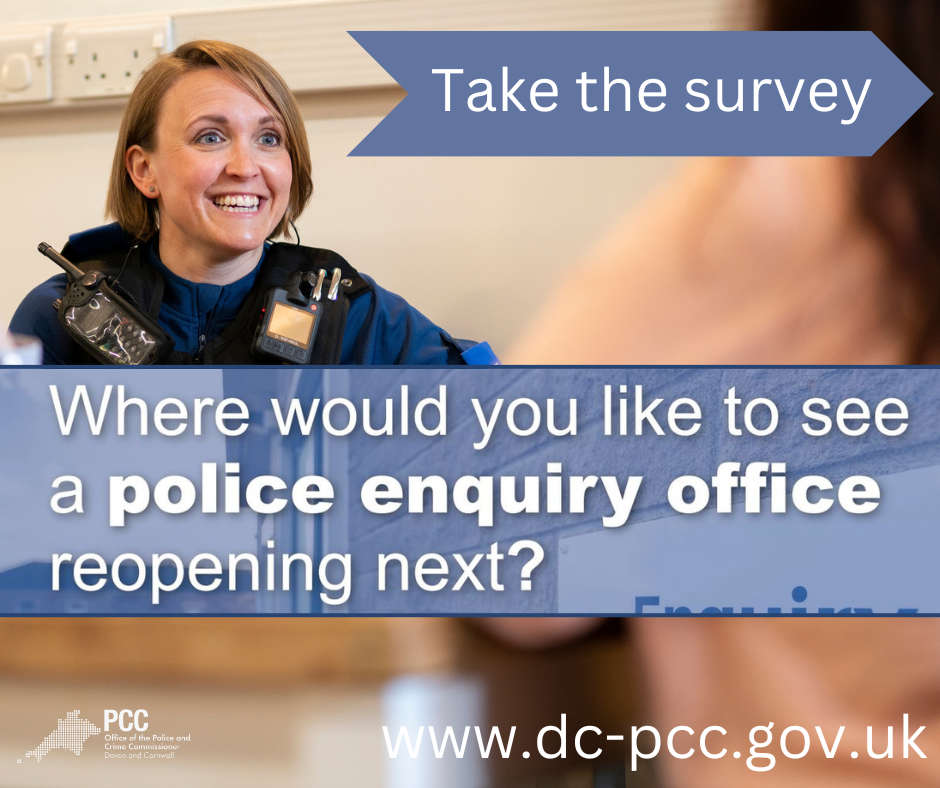 The Police and Crime Commissioner for Devon, Cornwall and the Isles of Scilly is planning to open more police station front desks – and wants the public to help decide their locations.

Six police enquiry desks are opening this financial year after Commissioner Alison Hernandez committed to invest in some of those which closed almost a decade ago.

Front desks are ideal places for residents to report crime, get advice on crime prevention or victim services and connect policing to local communities.

When not dealing with people face to face Police Enquiry Officers are able to deal with non-emergency email contacts, reducing pressure on the force’s 101 service.

The first round of openings has seen Newton Abbot, Tiverton, Penzance, and Truro front desks reopen this week, with Bude and Falmouth stations due to reopen in early 2023.

Now the Commissioner has detailed a set of criteria for deciding which ones open next, with public support one of the determining factors. She is asking the public to give feedback in a survey which runs until the new year.

“Early feedback from communities where police enquiry offices have reopened have been extremely positive,” the Commissioner said.

“Crimes have been reported, a vulnerable missing person given shelter and assistance and crime prevention information handed out.

“The project has so far created 26 part time police enquiry jobs and helped ease the pressure on police contact centres by enabling more people to meet an officer or police member of staff in their community.

“I know more communities would like to see their police stations reopened to the public and I am absolutely committed to delivering more openings. Public support was a vital component in deciding the first locations for this investment, so now I’m asking people to let me know which stations they would be most likely to use if their front desks were reopened.”

Anyone wanting to have their say is being asked to choose three preferred locations from a list of 44 police stations in the Devon and Cornwall Police area. All stations on the survey, which can be completed here: https://www.surveymonkey.co.uk/r/DYPSW66 and will remain open until midnight on January 2, 2023, are currently operational and have the potential to have their front desks reopened.

The other criteria which will determine which police enquiry offices reopen are:

So far this year Tiverton, Newton Abbot, Penzance and Truro police station enquiry offices have been reopened. Bude and Falmouth offices are due to reopen in the new year.

For details of address and opening hours of the 15 police front desks already open in Devon and Cornwall visit https://www.devon-cornwall.police.uk/contact/police-enquiry-offices/.