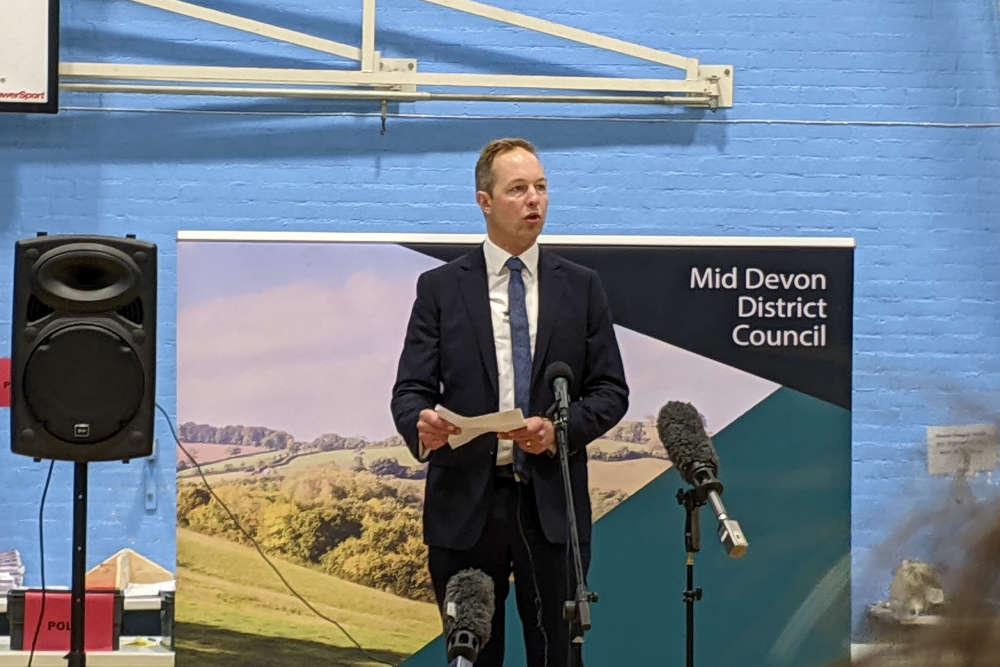 The Liberal Democrats have won the Tiverton and Honiton by-election, defeating the Tories to pull off one of the biggest upsets in recent political history.

Winner Richard Foord overcame a 24,000-plus majority secured at the last election by former Conservative MP Neil Parish, who resigned in disgrace after admitting to watching pornography in the House of Commons.
It ranks as the biggest majority ever overturned at a by-election.
After eyeing up the seat when the by-election was announced – pouring huge resources into the area – the Lib Dems exceeded predictions of a close contest to win by more than 6,000 votes.
Mr Foord becomes the first Lib Dem MP in Devon since Sarah Wollaston, who defected from the Tories in 2019 to the short-lived Change UK and subsequently the Lib Dems.
The former army major declared the result a political “shockwave” and said it was a damning indictment of Boris Johnson, who shortly before also lost the Wakefield by-election to heap further pressure on his premiership.
Taking to the stage at Crediton’s Lords Meadow Leisure Centre once the result was declared, Mr Foord said: “Tonight, the people of Tiverton and Honiton have spoken for Britain. They’ve sent a loud and clear message; it’s time for Boris Johnson to go – and go now.”
“Ours is a great country, and there’s no greater part of it than Devon. But every day Boris Johnson clings to office, he brings further shame, chaos and neglect.
“Communities like ours are on their knees. Every one of us standing on this stage as candidates has heard the pain people are suffering as the cost-of-living crisis starts to bite.
“Yet when Boris Johnson could be fighting for farmers, for our NHS and for rural services, he’ll be fighting once again to save his own political skin.”
Ahead of the results, the prime minister said it would be “crazy” for him to quit if his party lost the two seats, adding: “Most seasoned political observers know that by-elections in mid-term are never necessarily easy for any government.”
But Mr Foord warned Conservative MPs who were “propping up” the prime minister that the Liberal Democrats “are coming,” saying they too would lose their seats at elections.
He promised to “work tirelessly” for his new constituents: “Whether you supported me or someone else, I want to let you know I’m here to represent you and stand up for everyone in Tiverton and Honiton.
“I will never take you for granted.”
Defeated Tory candidate Helen Hurford was quickly ushered out of the sports hall once the result was declared just after 4 a.m., failing to give a concession speech or speak to the media.
Labour lost its £500 deposit after failing to secure five per cent of the vote. The party’s share of the vote collapsed as previous supporters switched to the Lib Dems in a bid to topple the Tories.
Candidate Liz Pole said: “Across the country, people have sent a clear signal that they have had enough of the Conservatives. I’ll continue to campaign in our communities and for a Labour government.”
The defeats in Devon and West Yorkshire mean Boris Johnson becomes the first prime minster to lose two seats at by-elections on the same night since John Mayor in 1991.
However, he will take solace from the fact that Mr Major’s Tory party went on to win the general election the following year.