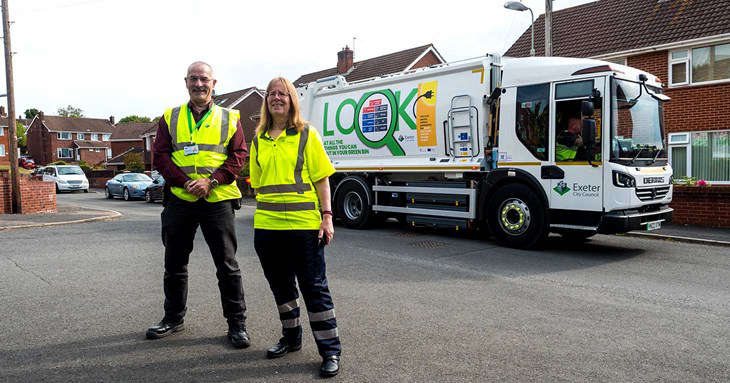 Refuse collections in Exeter have gone green after the first three electric powered dustcarts became fully operational. They will be powered by renewable electricity captured at the Council’s solar farm and battery storage facility at Marsh Barton.

The vehicles were trialled last year and were considered a great success by the drivers and loaders, who were able to carry out a day’s collections on a single charge.

Three are now fully operational – and future plans will see the city’s entire fleet of 15 refuse vehicles will be all electric.

Cllr Ruth Williams, Lead Councillor for Recycling, said: “We have three electric vehicles now out on the road as part of the fleet for refuse collection in Exeter.

“We are planning to get more, but we’re well on the way now – and they are absolutely fantastic. They are very quiet compared to the diesel ones. They’re much cleaner and we’re not pumping out all the CO2 from diesel, so it’s a great day for Exeter to see these vehicles in service.”

The electric vehicles are another step on the Council’s journey to becoming Net Zero Carbon by 2030.

He said: “These trucks go out across the city - there are 15 of them at the depot, and we now have our first three that are electric.

“Exeter’s refuse vehicles are out every day throughout the city, and each truck runs its engine almost constantly from the moment they go out to when they get back to the depot. That’s 7 to 8 hours of emissions from a truck, collecting around nine tons of rubbish, being moved around by diesel engines throughout our city – that’s what’s going to be saved by using these electric vehicles.”

He added: “This is a significant investment, a significant change to the way we operate. These vehicles will be charged from our solar farm at Water Lane in Marsh Barton. So not only will they be cleaner, the electricity we use we know will be green electricity, so it is a definite plus.”

Replacing three of the 15 diesel vehicles with fully electric ones will save 10,500 litres of diesel per year for each vehicle - a total of 31,500 litres per annum. That’s more than a quarter of a million litres of diesel over their eight year lifespan.

The aim is to replace all diesel refuse vehicles with electric ones within the next six years, saving 157,500 litres of diesel per year.

The carbon saved on each electric vehicle is approximately 27,000kg per year.