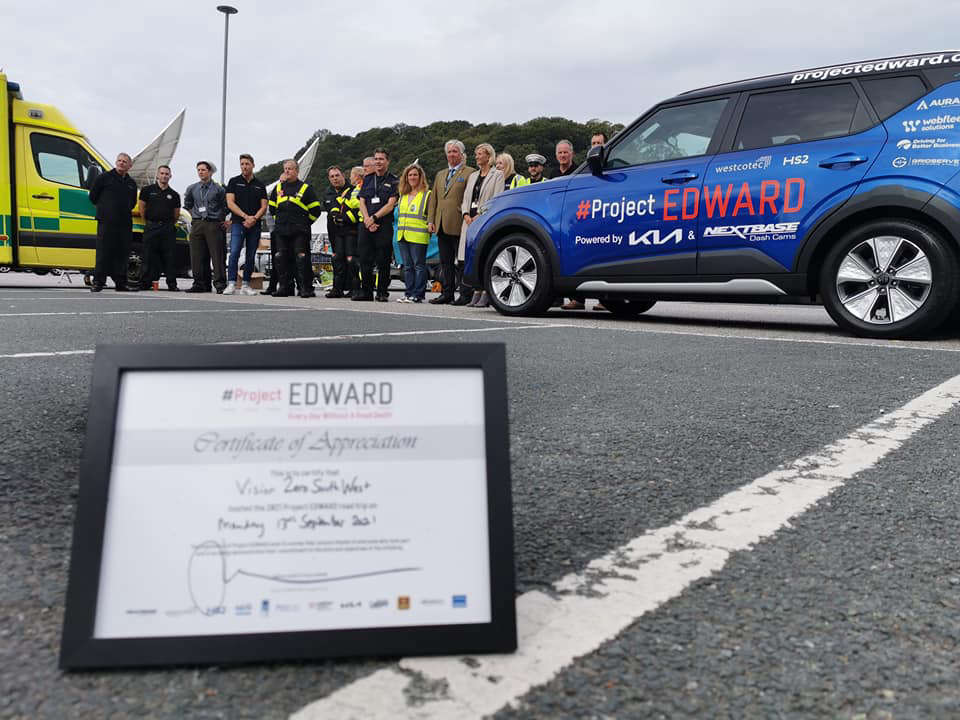 A convoy of emergency service vehicles travelled along a major route in Devon today Monday, September 13th to demonstrate the resources required to attend a serious road traffic collision. Devon and Cornwall Police vehicles, Devon and Somerset Fire and Rescue Service engines, ambulances, National Highways vehicles and emergency service motorbikes travelled together along the A38 from Plymouth to the Devon Air Ambulance base at Exeter Airport. The convoy then formally launched the national road safety road trip organised by the charity Project EDWARD (Every Day Without A Road Death).

A convoy of emergency service vehicles travelled along a major route in Devon today Monday, September 13th to demonstrate the resources required to attend a serious road traffic collision.

It comes after a spate of crashes across the South West which have resulted in numerous deaths and serious injuries over the past few weeks.

Devon and Cornwall Police vehicles, Devon and Somerset Fire and Rescue Service engines, ambulances, National Highways vehicles and emergency service motorbikes travelled together along the A38 from Plymouth to the Devon Air Ambulance base at Exeter Airport.

The convoy then formally launched the national road safety road trip organised by the charity Project EDWARD (Every Day Without A Road Death).

All those taking part are members of the Vision Zero South West road safety partnership, a group which aims to eradicate ALL serious and fatal collisions from Devon and Cornwall’s roads.

The event also included details of a new project which will see 170 dashcams given out free to businesses that regularly use our road network to allow them to feed into Devon and Cornwall Police’s Op Snap.

The emergency services gathered in the car park of Sainsburys at Marsh Mills in Plymouth this morning where they were joined by senior councillors, members of the Safe38 campaign group and other Vision Zero partners who all share the aim of cutting serious collisions to zero.

The road trip was officially launched at 11am by Police and Crime Commissioner Alison Hernandez, who is chairman of Vision Zero South West and also the national APCC lead for road safety.

Commissioner Hernandez said: “Vision Zero believes that every tragic death on our roads is avoidable and we’re determined to do everything within our power to make this vision a reality.

“We can only do this by working together in close-knit partnership with the other agencies who also see the dreadful and far-reaching effects of these collisions.

“I’m delighted to be launching the Project EDWARD road trip which I hope will shine a light nationally on some of the innovative projects we’re undertaking to prevent death and serious injury on our roads.

“A great example of this is our dashcam project which will see my office and National Highways pay for 170 dashcams to be supplied to local companies, free of charge.  This gives us 170 extra pairs of eyes on our roads to capture dangerous drivers and take action against them through Devon and Cornwall Police’s Op Snap initiative.

“With more people watching, the chances of bad drivers getting caught will increase.  I hope this makes motorists more alert and, in turn, will make our roads safer for everyone.”

Superintendent Adrian Leisk of the roads policing team said: “Sadly we still see far too many people being killed or seriously injured on our road network across Devon and Cornwall and while the numbers are reducing, there is still much more work needed to educate road users in staying safe.

“It is estimated the cost to public services of a fatal collision is around £2.2m but the far greater cost is the impact that loss of life has on families and loved ones of the deceased – a message colleagues had to deliver many times last year after 55 people sadly lost their lives on our roads.

“Project EDWARD helps us to raise awareness of the devastating consequences of serious and fatal collisions and this convoy will simulate the significant number of resources deployed to collision scenes.”

Speaking about the dashcam project, Mark Cartwright, Head of Commercial Vehicle Incident Prevention at National Highways says “I am extremely pleased to be working with Devon & Cornwall Police and Vision Zero South West on this initiative which aims to improve safety for all by shining a light on poor driver behaviour, such as close following, undertaking, dangerous driving in the South West.

“This initiative also aims to raise awareness of Operation Snap and encourage motorists to consider their driving behaviour.  We are confident that, working together with our road safety partners, this initiative will help widen our safety messages to drivers and raise awareness that those who engage in high-risk behaviours can expect to be spotted and, if an offence has been committed, action will be taken by our enforcement partners.”

Councillor Stuart Hughes, Devon County Council Cabinet Member for Highway Management and Vice Chair for the Vision Zero South West road safety partnership, said: “The rise in deaths on our roads this summer has been alarming.

“Sadly, the vast majority of those who have died on Devon’s roads this year have been local and we would like to remind everyone to take extra care whether you are driving, riding or walking.

“All of the Vision Zero partners are committed to making our roads safer for everyone, and we can all play our part in being considerate and looking out for others when on Devon's roads.”

“As a fire service we attend about 1,000 road traffic collisions every year and are acutely aware of the trauma and long-lasting effects these incidents have on those involved and their families and communities.

“Project EDWARD provides an opportunity for us to showcase our road safety partnership working whilst getting important safety messages out to our most at risk road users.”

James Millidge, chairman of the Safe38 campaign group, said: “Safe38 are delighted to be involved in this vital safety initiative on the A38 and beyond.

“We hope these dashcams will help encourage drivers to think carefully about their own driving as safer roads begins with all of us taking responsibility for our own driving behaviour and to make positive changes when needed.”

“Our collective vision is for the road network of Devon, Cornwall and Isles of Scilly to be free from death and serious injury by 2040. While bold and ambitious, this goal is achievable if we work together and continue to lead the way when it comes to improving road safety.”

DAA is proud to  work with all emergency services across the region, in support of the Project Edward and Vision Zero initiatives.  Devon Air Ambulance will help to showcase the importance of post-crash care, while other agencies, organisations and emergency services will promote discussion around vehicle safety, safe road use, safe speed, and safe roads and roadsides.Last year, 216 missions of the 1507 missions that Devon Air Ambulance’s two aircraft and two Critical Care Cars attended were to road traffic collisions. This accounts for over 14% of all missions.

Devon Air Ambulance Operations Director, Nigel Hare said:  ‘Every fatal road traffic collision is a tragedy, not just for the family and friends of those that have died, but also for others who were directly involved or who kindly stopped to render help and assistance.

‘The greatest tragedy, however, is that often these collisions are avoidable. All of us that drive can help reduce the chances of such tragedies occurring, simply by driving with greater attention to the road conditions and other road users.’

Head of Communications at Devon Air Ambulance, Charlotte Leventis said:  ‘Halving road deaths by 2030 is a worthy and ambitious aim, but we’re not there yet. That’s why we are delighted to support the Project EDWARD campaign and to help raise awareness about the efforts being made to enhance safety on our roads.

‘Without the expert and specialist attendance of the air ambulances services and of our colleagues in the Ambulance Service, statistics would be all the more grim. It’s thanks to the post-crash pre-hospital care given by specialist clinical teams at the roadside that more families and communities do not suffer the tragic impact of road traffic collisions and the loss of loved ones.

‘As a charity that is 100% funded by the communities we serve, we are absolutely behind this campaign and in supporting the message being rolled out as the Project moves across the country: Enhance road safety, enhance post-crash care: reduce road deaths.’