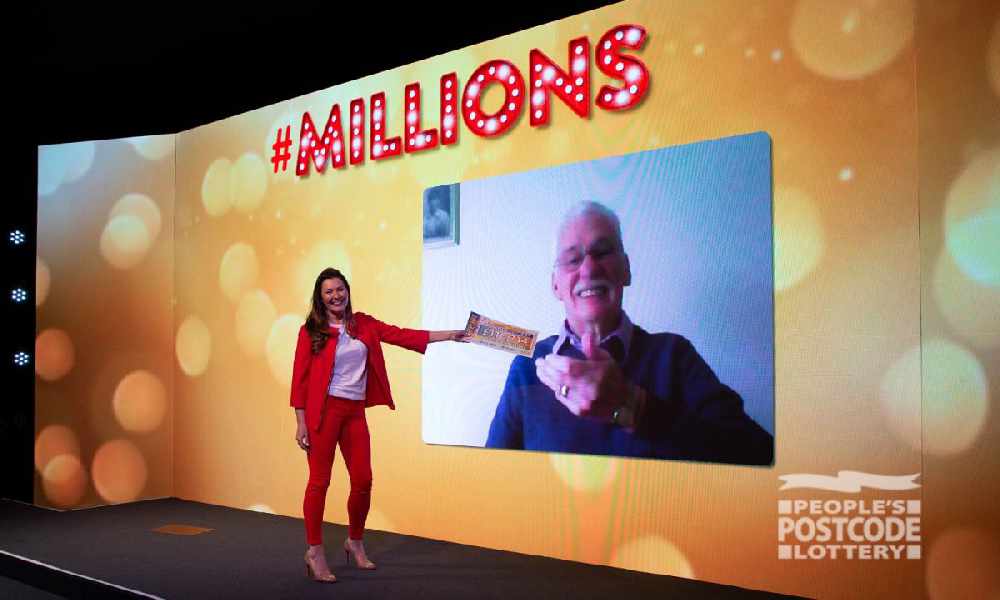 Today, 233 players across Exeter postcode sector EX2 4 are celebrating after winning a share of this month's Postcode Millions, worth a thrilling £3.1 Million! The biggest prizes were scooped by those playing with the full winning postcode, EX2 4RL. 12 delighted neighbours won cheques for £110,714, while a 13th doubled their prize to £221,428 because they were playing with two tickets.

The residents found out how much they'd won during video calls with People's Postcode Lottery Presenter Judie McCourt. Watch Judie reveal the winning postcode and see some of our winners' reactions in our Facebook Live video.

Linda and her husband, John, were delighted when they found out she'd won a huge £110,714 cheque. Linda exclaimed, "Wow! That's amazing. I want to say what Hastings said on Line of Duty, 'Jesus, Mary, Joseph and the wee donkey!'"

Linda and John will treat their family, as well as themselves with the winnings. Linda said, "We have three daughters and six grandchildren so we'll surprise them. We had holidays planned that we've had to postpone. We're hoping to go to Hawaii later in the year and this will really help with that." She added, "There's been a lovely feel with the neighbours coming together over COVID so it's lovely to hear so many of us have won."

When asked how they'd celebrate, Linda said, "Recover! We'll have to have a bottle of something!" John added, "We'll need to let Ken Bruce on the radio know what we've won as Linda texted into his show the other day to say we'd be talking to you!"

Manda was another lucky winner of £110,714. When Judie revealed her cheque, Manda exclaimed, "No way! Oh my goodness, I can't believe it, oh my goodness me, oh blimey! I'm blown away and in shock."

The mum-of-two plans to make more living space for her kids, as well as visit her sister who has lived in Australia for 14 years. She said, "I've got a couple of children and the house never feels big enough, so maybe an extension would be nice, and a new kitchen.

"I've never visited my sister where she lives, so that will be really exciting. We'll take the whole family."

Like Linda, Manda was delighted that many of her neighbours had also won. She added, "That's incredible, I'm really pleased. It's a really close-knit community, a friendly street with lots of families. Sharing the excitement with others that might have won something has spread the love for the Postcode Lottery already!"

Manda, who works as a manager for a DIY retailer, has been incredibly busy working throughout the pandemic. She said, "It's been a crazy year. I feel like this is a special treat. I know I'm lucky to have a job and many people have been stuck at home and it's been difficult, but I've been at the other end of it. It's been a manic year - I've never experienced anything like it."

Manda is a massive football supporter and can't wait to get back to a live match as soon as possible. She said, "I support Arsenal, so I will definitely be treating myself to a trip to the Emirates next season. I might spoil myself and get a club-level ticket."

Hospitality worker Lynn was left speechless when she saw how much she'd won. She exclaimed, "Oh my God! My tarot cards said I'd never win money! I can't believe this is even true. Never in my life did I ever think I'd have that money." She added, "I have four children and I'd love to help with deposits for houses. I need to let it all sink in, though. We've been doing up the house in stages as we could afford it, so now we can finish it!"

When Judie asked Lynn how she'd celebrate, Lynn joked, "You can come round tonight and have a glass with me in my garden! We'll probably get a takeaway as everywhere will be booked, but I'll have a celebratory barbeque at the weekend. Hopefully I can get some champagne in."

After the excitement had sunk in, Lynn called her son to tell him about her good news. She commented, "I just FaceTimed him. He didn't believe it. He rang me back seven times!"

Reg, a retired telecoms engineer, is now looking forward to a relaxing break in the sunshine with his windfall. He said, "We had a family holiday planned to Cyprus for last year but that obviously was cancelled, so hopefully that will get resurrected now."

His five grandchildren are aged between 16 and 26, and he hopes to spend time with them on holiday. Reg joked, "As the grandchildren get older, they don't actually want mum and grandad there, do they?"

Our remaining winners in the postcode sector received different prize amounts depending on the number of tickets they played with. 187 people with a single ticket won £5,961 each, 26 people with two tickets won £11,922 each, and seven people with three tickets won £17,883 each.

Presenter Judie McCourt said, "What a great day for Exeter! It was lovely to virtually meet and reveal such big cheques to the winners. It sounds like everyone has exciting plans for spending their money, from holidays in the sun to football matches!"

Today's prize is part of a draw promoted by Postcode Children Trust, which benefits organisations like Whizz-Kidz, CLIC Sargent and Magic Breakfast that inspire and support children and young people to make the most of their lives and opportunities within their communities.

With 32% of the ticket price going to charity, our players have now raised more than £700 Million for good causes across Great Britain and internationally. People's Postcode Lottery players have funded over 9,000 deserving projects protecting people and the planet.