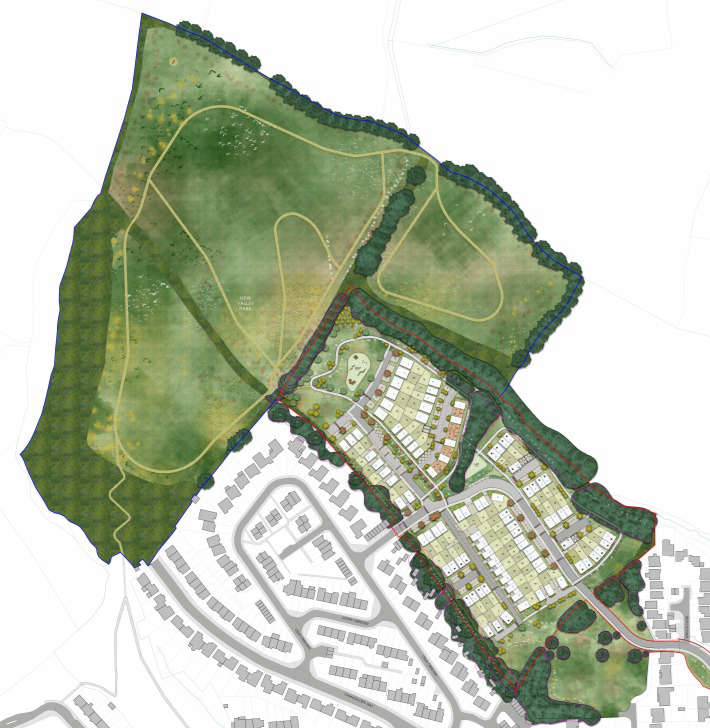 Controversial plans for up to 93 new homes on a greenfield site on the edge of Exeter have been refused due to concerns over their impact on the landscape and setting of the city. Hundreds of objections were made against the application at the northern edge of Exeter near Beacon Heath, off Spruce Close and Celia Crescent, put forward by Devon developer Salter Property.

Controversial plans for up to 93 new homes on a greenfield site on the edge of Exeter have been refused due to concerns over their impact on the landscape and setting of the city.

Hundreds of objections were made against the application at the northern edge of Exeter near Beacon Heath, off Spruce Close and Celia Crescent, put forward by Devon developer Salter Property.

The development was originally for up to 105 homes but, following initial complaints earlier in the year, this was revised downwards after adjoining fields were allocated for an area to be called ‘New Valley Park.’

However, members of the city council’s planning committee still expressed concerns and last month voted to look at the site before making a final decision, despite officers recommending approval subject to conditions. Then on Monday night, members voted unanimously to reject it.
Speaking against the proposal, Councillor Naima Allcock (Labour, Micinglake & Whipton – the ward of the proposed scheme) told members: “The proposal before you this evening is for a car-led development, cut off from community amenities and built on the very land that our vision says will be safeguarded from development.”

She added: “As members saw on their site visit, the proposed site has steep hills in both directions, which would make walking and cycling for anything other than recreation quite difficult. The nearest train station is a 22-minute walk away and the current bus route is extremely limited. This development would therefore increase car dependency and worsen environmental impacts.”
Council leader Phil Bialyk (Labour, Exwick) said: “I am totally committed to saving the hills around Exeter, as I have said. They are so important to us. It is an important amenity space. We have to protect it for the residents of Exeter.”

However, recommending approval, a report by the council’s planning officer said the development would have secured more than 10 hectares of public open space – “far more than a typical residential development of this scale” – including over nine hectares at the ‘New Valley Park’.
The report added: “This land will be secured in perpetuity, benefitting not just current, but future generations as well. It will effectively stop any further development encroachment into the countryside in this part of the city.”

In a letter to address previous concerns, director of the development company Peter Salter added: “A major concern for residents is loss of open space. This to me is not a sustainable argument as currently residents walk around private land, without permission. At any point in the future the landowner could decide to close off his land.”
“For example, to enable him to place cattle in the fields, which would mean an end to public access. Whereas if the application is approved, it will provide a far greater area as new valley park in perpetuity. This guarantees the exact thing that is a major concern of local residents, public open space.”

Stagecoach also wrote to the council to support the scheme, with plans including £90,000 to extend the F1 bus route. The operator suggested the development would also improve access to buses for other people living in the immediate vicinity.
But speaking at the original meeting in September, Cllr Allcock said that existing problems with the F1 service meant it is unlikely to reduce car use generated by the development and buses going up the road every half-hour would “dramatically increase congestion.”
The application contained provision for 32 affordable homes, which Councillor Ruth Williams (Labour, Mincinglake & Whipton) said had made ruling on it “quite challenging” and pointed to the number of people on a waiting list for housing in Exeter.
“I know there were many hundreds of objections to this but I think we also have to bear in mind all those thousands of people who aren’t seeing these planning applications and they won’t be supporting it, because they’re desperate for somewhere to live,” said Cllr Williams, who concluded that she would refuse the application.

Councillor Rob Hannaford (Labour, St Thomas) also said the application was too car-driven despite its bus plan and pointed to existing problems with services in the area. He questioned whether developer contributions to schools and health services would go to the areas needed.
The committee decided the development was against its policy to move development away from the hills, described as “strategically important to the setting of our city” and added that, unlike before, the council was now able to demonstrate a five-year housing supply.