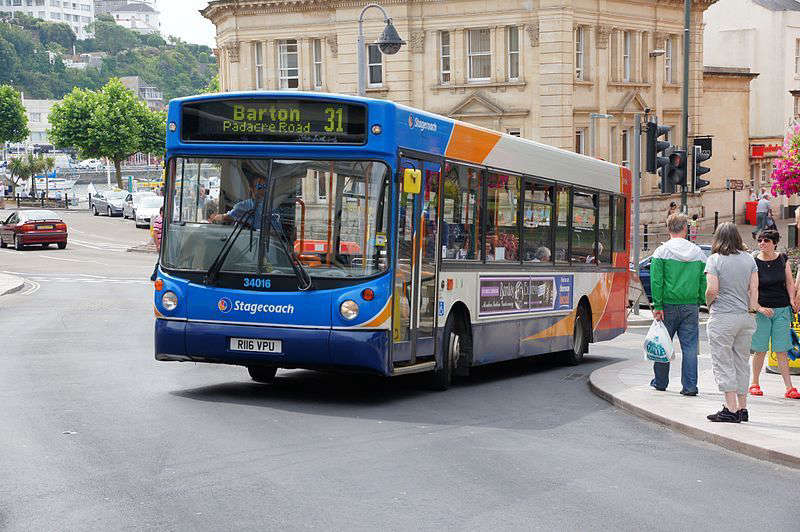 Devon could get a £34 million boost to its bus services, if the county council’s bid for a pot of government funding is successful. The council’s ruling cabinet has agreed to bid for the cash from the government’s £3 billion ‘bus back better’ programme to improve local bus services across England.

Devon could get a £34 million boost to its bus services, if the county council’s bid for a pot of government funding is successful.
The council’s ruling cabinet has agreed to bid for the cash from the government’s £3 billion ‘bus back better’ programme to improve local bus services across England.
But whilst the plan was broadly welcomed by councillors from across the political spectrum, one Lib Dem thought transporting people in “huge buses” was a blast from the fifties and that more people should be hitchhiking.
The county’s proposals, being developed in partnership with Devon’s bus companies, aim to make buses cheaper to use, greener, more frequent and more reliable. A public consultation will start across Devon in November.
Also included are plans for regional zone tickets to simplify fares, by working with neighbouring councils, and bringing in ‘young person’ tickets for 16 to 18 -year-olds, one of the age groups most heavily reliant on buses.
An additional £7.5 million could also be spent on bus priority measures to speed up journey times in urban areas such as Exeter, Exmouth, Barnstaple and Newton Abbot, as well as improving bus stops and other infrastructure in the rest of the county.
A council report said: “Bus is the main form of public transport in Devon, providing services to a large range of people, many of whom have no alternative means of transport. The opportunity provided by the government to bid for extra funding will provide a quantum leap in how the bus service operates in the future.”
Councillor Andrea Davis (Conservative, Combe Martin), cabinet member for climate change, environment and transport told the meeting: “It’s very ambitious, it supports Devon County Council’s carbon reduction. It’s about operating services, cutting fares, lots more services and frequent services so that residents have the choice over the mode of transport that they use.”
Councillor Alan Connett (Lib Dem, Exminster & Haldon), opposition leader on the council, said it was a “very exciting set of proposals” and added: “If successful it would bring an enormous benefit to Devon and for the bus passengers across the county who use them. There’s much to be applauded here and I really do hope the bid is successful.”
Leader of the Labour group Councillor Rob Hannaford (Exwick & St Thomas), while saying the “proposals to make buses greener, cheaper and more reliable is really welcome,” pointed to the current problems at Stagecoach South West, including a shortage of drivers and industrial action, as reasons for why the council should look into public ownership of buses, as has recently happened in Manchester.
RMT union members are currently set to walk out over pay for 24 hours on Monday 18 October. Stagecoach has offered drivers a 9.7 per cent increase, linked to productivity changes. It says passenger numbers are below pre-covid levels, with fares insufficient to cover day-to-day costs of running the serice. The RMT says the offer comes with strings attached which equate to “savage cuts.”
Devon County Council’s new plan calls for greater integration with the rail and coach network in Devon and better cooperation with other neighbouring councils to recognise that journeys often cross county boundaries.
The strategy also sets out targets for moving towards zero-emission vehicles. The council has been involved in two previous unsuccessful bids for reduced emission or electric vehicles. The report says: “The challenge in a county like Devon is the range of the vehicles versus the length of the routes operated.”
However, Councillor Julian Brazil (Lib Dem, Kingsbridge) said the report was a “massive, missed opportunity,” and claimed the council should be doing more to get people sharing smaller vehicles and even hitchhike.
“The old fashioned idea of transporting people in huge buses around rural lanes, or indeed on roads that were built for horse and coaches and not for double decker buses, I think is going back to the fifties.
“Instead, we should be looking to introduce some kind of hybrid bus-taxi service using the information technology that’s available to us, using people carriers. Looking to introduce things like a hitchhiking app that encourages more people to hitchhike, car-sharing…
“That’s what this report should be encouraging. More innovative, forward-thinking and ground-breaking ways of delivering truly public transport to all areas – not just towns, but to rural areas as well.”
The cabinet unanimously agreed the main principles of the plan, to submit the bid and to launch a public consultation. From the start of November, the Department for Transport will assess the bids submitted by each authority and respond with a funding package for the next three years.
PROPOSED BUS IMPROVEMENTS
Improvement to rural services

Provision of at least four return journeys Monday to Saturday for all communities with a population of over 500.
Exploration of alternative models of delivery including Demand Responsive Transport (DRT), expansion of Fare Cars or fixed routes.

On improved inter urban and city corridors; a service of at least three journeys per evening and on Sunday.
Expansion of hourly night-time services for routes carrying over 2 million passengers* per annum. Inter-urban services
Improvements to services identified in the Exeter Transport Strategy up to a maximum frequency of 15 minutes.
Other services into Exeter to gain an additional journey per hour, plus those to strategic towns such as Barnstaple, Newton Abbot or Plymouth currently carrying over 100,000 passengers* per annum.

Strategic links improved between centres of population.
Better connections with the strategic rail and coach network. Examples of possible links included in Appendix A.