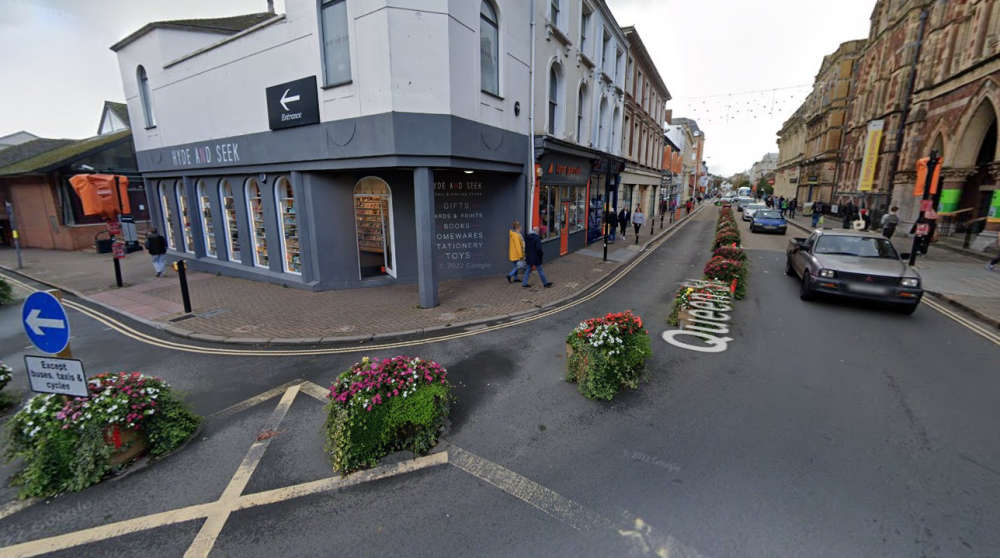 A redesign of Exeter’s Queen Street has been approved, with previously agreed cycle lanes being scrapped.

A redesign of Exeter’s Queen Street has been approved, with previously agreed cycle lanes being scrapped.

Last year, councillors agreed to spend £250,000 constructing a layout similar to the current ‘pop-up’ one, which was installed early in 2021 to help with social distancing and to encourage more walking and cycling.

As part of the agreed scheme, approved by the Exeter highways and traffic orders committee (HATOC), the southern pavement opposite the Royal Albert Memorial Museum (RAMM) was due to be widened with two new cycle lanes either side of a single lane for vehicles.

But after Devon County Council said the scheme’s layout needs to be “revised to remain in budget” owing to “significant increases in the cost of materials and engineering work over the past year,” a new layout was agreed at a HATOC meeting on Monday [16 January].

This includes scrapping the dedicated cycle lanes planned for the part of Queen Street nearest to the city centre. A widened new footpath opposite the RAMM will now be 3.4 metres – around half a metre less than previously planned.

This is to allow the road to revert to having two lanes again. However, as at present, private motor vehicles will still be unable to go west towards the clock tower.

According to the county council, having two lanes and using the existing signalised junction of Paul Street and Queen Street, instead of the shuttle signal arrangement in place for the temporary scheme, will reduce the time buses, taxis and cycles heading west will have to wait for a green light.

Iron Bridge will remain one-way eastbound, except for cycles, under the revised plan, while cycles will be the only vehicles allowed to enter Queen Street from Paul Street and Upper Paul Street.

Speaking at the meeting, local councillor Carol Whitton (Labour, St David’s & Haven Banks) said: “This is a scheme which will deliver a significant and much-needed improvement for pedestrians, and particularly over and above the temporary engagement that’s in place at the moment.”

And while admitting to being “somewhat disappointed” about the loss of the dedicated cycle lanes, adding that cyclists should be “a high priority for us,” Cllr Whitton acknowledged “some advantages” to the new proposal.

“Now that there will be two-way traffic, it will mean that those same cyclists are not held up waiting a long time for the lights to change and being tempted to jump the lights.”

When the temporary measures were first introduced, Devon County Council described them as ‘temporary,’ but a four-week consultation on whether to keep them subsequently took place last year, following a recommendation from HATOC.

Of around 600 public responses received, they were broadly spilt 50-50, though improving the area for pedestrians was broadly welcomed and the majority of local organisations were in favour, including Exeter College.

Cllr Martin Pearce (Labour, Duryard & St James) also welcomed the scheme, but urged the council to look at addressing the “dangerous” section of cobbled road between Queen Street and Little Queen Street, which he called a “point of conflict” between pedestrians, delivery vehicles, buses and private vehicles.

“There was a really unfortunate accident that led to a loss of life not long ago … so it’s something that really needs addressing,” he said.

In response, an officer said the council would look at the signage currently in place, and it may consider the potential for installing cameras and enforcing moving traffic offences in that area.