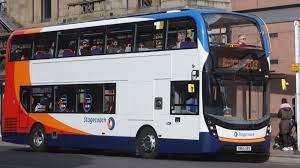 Stagecoach bus staff are reportedly to go on strike next month. The strike could last for one day and industrial action is said to have been called as a request for more pay.

Stagecoach bus staff are reportedly to go on strike next month.

The strike could last for one day and industrial action is said to have been called as a request for more pay.

Action has been called not just in the Southwest but in a number of other Stagecoach regions, by members of the RMT union.

Up to 700 people are expected to walk out in Devon on Monday, October 18, unless a solution can be found before then.

The company has branded it 'irresponsible and counter-productive.'

The union has reportedly rejected a pay rise of nine per cent, linked to productivity improvements.

Stagecoach Southwest added that it recently put a "no-strings offer" upon the union's request, which would see employees receive a 2.2 per cent pay rise from October 1, as well as a one-off payment of £300.

Stagecoach West Managing Director Mike Watson said: "Local people who depend on buses to get to work and access public services, as well as local businesses struggling to recover from the pandemic, will be extremely angry at the threat of completely unnecessary disruption to their bus services.

"This planned action is irresponsible and counterproductive when the focus should be on protecting the jobs of our people and the long-term sustainability of services for the local community.

"We are committed to offering good packages for our people - and the offers we have made are line with other bus operators and reflect inflation over the period. It is disturbing that the many offers we have put to the union have not been put to a vote by their members.

"Covid-19 has resulted in bus passenger numbers being only 70 per cent of pre-pandemic levels. Passenger fares are significantly short of what is needed just to even cover the day-to-day costs of running services. As a result, services being run by all bus operators require support from the government.