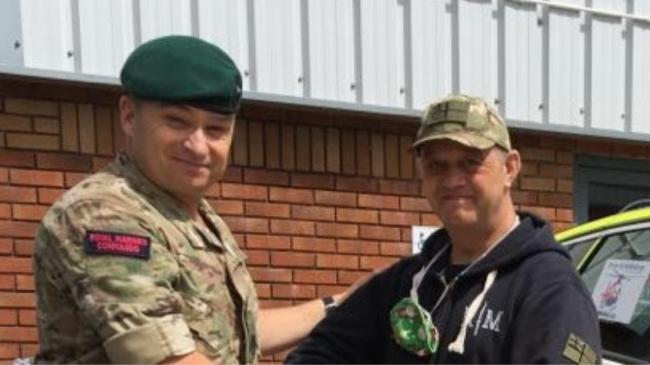 Volunteer Steve Randell went above and beyond in his role to help when he was called to Jon Jackson’s home, in Lower Crooked Meadows, Okehampton, and spotted a host of Royal Marines memorabilia.

Volunteer Steve Randell went above and beyond in his role to help when he was called to Jon Jackson’s home, in Lower Crooked Meadows, Okehampton, and spotted a host of Royal Marines memorabilia.

Jon, aged 49, who suffers with post-traumatic stress disorder (PTSD) dating back to childhood, held back the tears when Steve - a Sergeant Major in the Royal Marines at the Lympstone Commando training camp when not volunteering for the Devon Blood Bikes service - gave him a coveted green beret for his collection.

Dad-of-one Jon said the green beret, which Steve took with him on tour to Afghanistan, has helped him cope at times when PTSD has threatened to overwhelm his day-to-day life.

Russell Roe, Devon Freewheelers deputy CEO, said the charity, this week celebrating Volunteers’ Week (June 1-7), could not operate without the selfless generosity of the ‘hidden heroes’, who gave up their time to help others.

Mr Roe thanked all those who supported the Devon Freewheelers day-to-day to keep the free Blood Bikes service on the road.

He said: “When I heard what Steve had done for Jon, going the extra mile, I wasn’t surprised. He is one example of how big-hearted and generous our volunteers are.

“As a charity, we are indebted to each and every one of our volunteers. We call them our hidden heroes. It’s thanks to them the wheels of the Blood Bikes service can keep turning.”

Jon, who was at the charity’s Honiton headquarters to thank Steve for his generosity, said the green beret gift was ‘right up there’ with the birth of his son.

“I have had PTSD from childhood and it’s been absolutely horrific.  Ever since then, normal day-to-day stuff has been difficult,” said Jon.

“I say I am a survivor not a victim. I hate that word. I have been told I am brave for talking about my childhood.

“I wanted to be a Royal Marine and even though I didn’t get in, I understand the Commando spirit and I live by that.”

“Being given the green beret is right up there with the birth of my son. If I am having a bad day, I will go over and touch it.

Steve, in the Royal Marines for 31 years, noticed the collection of Commando memorabilia, books on the armed forces and old shell casings while he was routinely swabbing Jon for Covid-19 before a hospital appointment.

During the pandemic Steve has been carrying out around 25 Covid swabs a day, when volunteering for the Devon Freewheelers.

Jon said: “Steve asked where my green lid was. I said I didn’t have one. He asked why not. I said ‘it’s disrespectful without earning it’.

“I explained what happened and why I couldn’t be in the marines or armed forces.

“For a man in his position - to give me his green beret which has been to Afghanistan - it made a mess of me, and my bottom lip was going.”

Steve, who trains the recruits who go on to become Royal Marine Commandos, said: “Jon came to the door and I noticed he was wearing a marines lanyard.

“Jon said he couldn’t have a green beret because he hadn’t earned it. But if you are that fanatical about the Royal Marines, pride of place in his display should be the green beret.”

A host of people, like Steve, have taken the time to volunteer during 2021, making a huge difference to the lives of others during what has been recognised as an exceptionally difficult year.